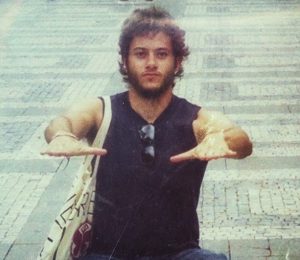 I received my Ph.D. in Psychology with a focus on Cognitive Neuroscience and Computational Cognition from the University of California, Los Angeles in 2016. My dissertation, Own Body Perception as Bayesian Causal Inference, documents my multifaceted investigation into the computational principles that underlie the brain’s ability to perceive the body by reconstructing it from the evidence it gathers from the visual, tactile, and proprioceptive sensory systems.

My research goals and interests revolve around the principled study of consciousness and its associated subjective phenomena, starting from the launching point of my graduate research on the subjective sense of body ownership, and continuing to probe the computational principles that give rise to this most mysterious of all natural phenomena.

Some of the sources of my inspiration:

I understand by the transcendental idealism of all appearances the doctrine that they are all together to be regarded as mere representations and not things in themselves, and accordingly that time and space are only sensible forms of our intuition (Anschauung), but not determinations given for themselves or conditions of objects as things in themselves.
Immanuel Kant, Critique of Pure Reason

We are still a long way from understanding what it signifies that nothing has any existence unless some small – and oh so transitory – consciousness has become aware of it.
Carl Jung, MDR pp154

The key element in answering the question “what is consciousness?” will be the unraveling of the nature of the “isomorphism” which underlies meaning.
Douglas Hofstadter, GEB pp82

The Buddha, the Godhead, resides quite as comfortably in the circuits of a digital computer or in the gears of a cycle transmission as he does at the top of a mountain or in the petals of a flower.
Robert Pirsig, Z.A.M.M., p16

This crippling of individuals I consider the worst evil of capitalism. Our whole educational system suffers from this evil: an exaggerated competitive attitude is inculcated into the student who is trained to worship acquisitive success as a preparation for his future career. I am convinced there is only one way to eliminate these grave evils, namely through the establishment of a socialist economy accompanied by an educational system which would be oriented toward social goals.
Albert Einstein

The man who comes back through the Door in the Wall will never be quite the same as the man who went out. He will be wiser but less sure, happier but less self-satisfied, humbler in acknowledging his ignorance yet better equipped to understand the relationship of words to things, of systematic reasoning to the unfathomable mystery which it tries, forever vainly, to comprehend.
Aldous Huxley, The Doors of Perception

Rivers do not drink their own water. Trees do not eat their own fruit. Clouds do not swallow their own rain. What great ones have is always for the benefit of others.
Hindu Proverb

Delving deeply into matters of great obscurity, plunging promptly into ocean depths at dawn, plumbing psyches for the aspired-to liberation, and soaking serenely in the collected knowledge of the ages.