This is a project I have developed that makes use of a Galvanic Skin Response measuring device that I built for use in investigating the Rubber Hand Illusion, work which was published earlier this year (Samad et al., 2015).  Briefly, the device measures conductance between the two electrodes using an Arduino-equipped board and some 3M Red Dot ECG electrodes (see photos below).  In tinkering with the device, I noticed a strong correlation between the slope of the conductance and my meditative state of mind, so I decided to investigate the potential use of this signal in training the mind to remain calm and tranquil.  I programmed this simple game using MATLAB and the PsychToolBox to make use of this correlation.  The purpose of the game is to keep your little fish avatar hovering at the bottom green-colored zone, where you will accrue points the longer you stay there.  This happens if your current skin conductance is low compared to your recent past.  Conversely, if your conductance is rising, which occurs when your autonomic nervous system is on “high alert” or “fight-or-flight” mode, the fish avatar will drift upwards until it hovers at the red-colored zone, where you will begin to lose points.  In the video above, the sudden upward deflection at around minute 1:05 was triggered by simulated hyperventilating, a known autonomic nervous system stimulating signal.

I got very excited by the prospects of such interventions for people that have anger management problems, or even those of us yearning to achieve calmer and more tranquil states of mind, but for whom meditation is too difficult or unengaging.  I am very attracted to the idea of “gamifying” meditation to provide a motivational aspect to what may otherwise be seen as a tedious chore.  This game itself, though very simple in nature, is indeed quite addictive and gratifying, and does truly seem to train me (at least in my 10+ hours of playing it) to meditate more efficaciously. 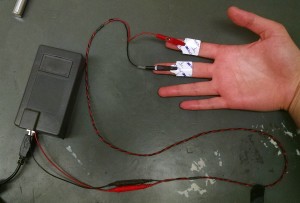 The custom-built GSR device and my hand connected to it. 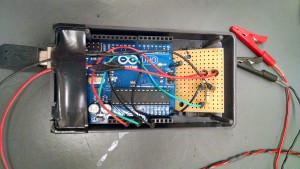 The simple circuitry “under the hood” and the Arduino UNO board.