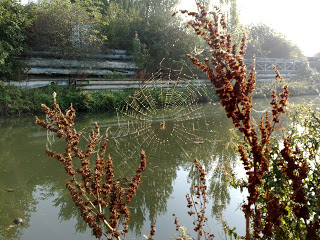 today i learned about peace

peace is always here, lying in wait, hiding underneath, beneath the surface, under the border, outside the margins, through the door, at the bottom of the bottomless pit, at the tip of the tallest mountain, and at the core of the deepest cave, waiting to be discovered and embraced, with a monstrous shriek of ecstasy, a wicked laugh of the purest sanity, and a roar of fearless calm and centered spirit.

i was walking home today from university and i found myself intensely aware. i took refuge in the awareness, just the simple act of observation. it was an important lesson for me. i had discovered within me an unconscious mechanism which automatically resisted suffering. something deep within, buried under many layers, and totally robotic. however, this discovery was my salvation. for within seconds, all of the lessons of the past six months came rushing back into my consciousness. the virtues of non-judgmental awareness, of simple acceptance, and of equanimity and loving-kindness. there had been hatred and suffering building up within me recently and i had all but forgotten about the dharma. however, as i took refuge in awareness today as i walked, i suddenly realized what had been going on. i reconnected with my pure essence. all of the sudden, the voices in my head reduced themselves back to their simple nature. no attachments and no identification with them. they became simply strange voices speaking to my awareness. this led to the search for the “I” and this was nowhere to be found. if the “I” is not in the thoughts, not in this body, not in these emotions, and not in this personality, then where is it. i realized it was, as far as i was concerned, non-existent. and this realization in itself was a huge relief. it relieved me of so many burdens, pressures, stresses, duties, worries, guilts, and concerns. for, if nothing was mine, how could these be mine. and all of the sudden, everything quieted down and i could not hear a single thing within and without. all was silent and i had finally found peace, by resigning from the search. when i stop trying to find, i find. this is a recurring phenomenon in my life. i think some refer to this as dialectics.

anyhow, so this was my moment of clarity today. it is a stark reminder of the path. a messenger from divinity, a silent cue, an invisible force moving and swimming in the undercurrents of this world of manifestations.

also strange to note that i have found my recent decline from the path reflected perfectly in the physical state of my body. as i began to drop, my body’s health began to proportionately drop. and when this started to happen, i began to resist and to judge. i applied tons of pressure on my self to re-engage the path so that i could be alright again. and this pressure just backfired. it drove me further and further away from the path. however, i am beginning to understand now. this is but one more lesson offered up by the subconscious shaping forces of life itself. i take it gratefully and piously. and now i just remain aware and un-attached to anything until the next lesson propels me further forwards.