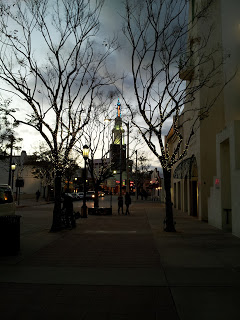 Ousted from collective visions to inhabit this isolate cell.
Masking the images with webs of intertwining vagrant thoughts. These words
whose slave I am: my subterranean wildebeest rushes to their occasion. Would
that a dyskinesic syndrome might mute the eternal strivings of this bag of
vises! The world adorned with my artifices; it becomes homely and inhabitable.
Importantly, as I see the agent that extorts and exhausts it. There is a faint
green line surrounding the ethereal tendrils of trees, softly brushing up
against and imploring me for deliverance to the cerulean roof. I instead
unsheathe my sword and cut him down unthinkingly, murdering as I do an entire
universe of insentient urges. Is growth anti-gravitational or rolling with the
hills? Is it slipping into a rushing rapid and sliding merrily into the ocean’s
bosom or fighting the good fight and finding my way out against the forces of
nature? Is it our responsibility to stay alive or to die willingly? How are
there countless striving wills co-existing and co-creating a universe of which
they are mere reflections? Hidden beneath the layers is a single thing, whose
essence is will. Do my atoms crave the affirmation of their existence? Does a
foul-smelling bacterium from my gut? Do computers? Does a planet? How can the
world be both subjective and objective? Why am I being constricted by my own
autonomic nervous system despite my pleas to it to just chill the fuck out? It
is a stupid reptilian reflex reprised from a vestigial history before mammalian
conceptions began to paint this tapestry of rumination and anticipation. Now we
have systemic catecholamine floods at mere voices and images spontaneous and
irrelevant. We beat our hearts to death expecting having to fight the vagrants
polluting our scenes, not seeing through the shadows to the firelight that
first set flight to the fancies of our mind’s delight. This is a gushing river of
blood we soak our over-worked muscles with when we should be laying in bed in
restful repose. But minds let loose to pursue their fickle shadows will not
settle down at the instruction, wild and unrestrained as they are. They must be
tied to a stake and vigilantly watched from sunup till sundown. Even the stick
to the hide is not too harsh a treatment for the unwieldy beasts that must be
trained. Pained am I by the thought of the innumerable miseries this world
contorts from. It is like a vast coiling tree writhing under the weight of its
own over-ripe fruit it catered to and grew to the breaking of its back. We are
hunched over under the burdens of the generations handed down to us callously. A
million arched spines are buried in my backyard plot, and not a single one
survived the onslaught of the ages. The decades rush forth from the fertile
broth of the hippocampus and evoke horrors that pacify our young into mindless
obedience and oblivion. I am so deathly exhausted of the brutal procession of
this cold dreary life. All I see is pithy eyes and stagnant minds. These fools
are blind, or unaligned. The paths they tread are speckled with myriad sharp
and noxious aspects, yet continue with their docile marching is all they can
do. I wish to be freed from the miserable scattering of the pieces of my
shattered mind. Find me a forge and a holy fire within which to fuse all the shards
back into union again. Maybe I should pay heed to the green filaments that
gently caress me as I walk amongst the solitary confines of these grey
prison-cities. Maybe I should pay homage to the patient sky-seekers whose aims
are always foiled, but whose cheer is never voided. They that serenely sway in
the most ancient dancing with the winds, whose lessons are freely on display
for the unseeing masses. Why have I abandoned those amongst whose congregation I
was born?